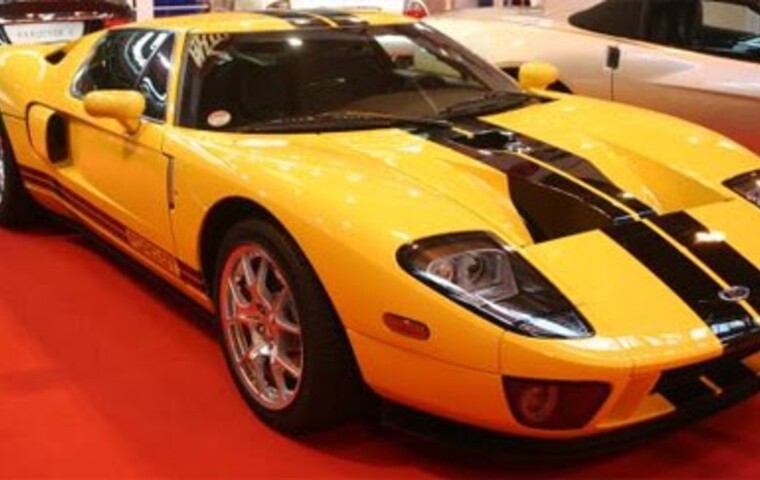 It all started back in the early 1960's when Ford decided they needed to tap into the already successful motorsport programme, thus improving there corporate image and an increasing car sales. Focused on this, a sports GT car suitable for use in competition was required and of course due to regulations a general public sale car road ready.
It was decided the quickest, easiest and above all cost effective way to succeed in its objectives was to purchase an already dominating sports car company. Ford milled over a few companies and decided on Ferrari due to a list of credentials, Ferrari who were already completely dominant in sports GT racing.
The company decided to call their new racing cars Ferrari Ford cars & the road cars would be named Ford Ferraris. Henry II had always wanted to see a Ford perform at LeMans since the beginning of the 1960's.
Initially, the company attempted to buy Ferrari in an anticipated course of lengthy negotiations, the proposal was gladly welcomed by Enzo. The deal had been all agreed, however in 1963, Ferrari called the merger off in, due to an agreement Italian car makers Fiat would give some much needed financial backing to the fellow Italain company, while still allowing them to maintain their independence. This forced Ford to raise their bids with Fiat, therefore an unhappy Henry II decided he would engineer his own racing car.
Ford wouldn't be beaten that easily and began negotiations with Sports car manufacturers Lotus, Lola, and Cooper. Cooper had no previous experience in GT racing or prototype and their Formula One progression was declining. This sealed the Cooper fate as far as the project. Lotus was already affiliated as a Ford partner due to their Indy 500 project. Executives were dubious with the regards to the ability of Lotus and the project. Colin Chapman evidently had similar views he asked a costly price for his part in the project and insisted it should be named a Lotus not a Ford, a possible refusal as it goes. Therefore Ford chose the Lola proposal, Lola had previously used a V8 in their mid-engined Mk6 the Lola GT.

Arguably one of the most advanced race cars of the present time, it performed exceptionally well at LeMans in 1962, even though the Lola GT didn't finish.

Eric Broadley decided on the agreeance of a short-term personal contribution to the project without Lola cars. Manager Broadley agreed on inclusion of a 1 yr collaboration project involving Ford and Broadley and in addition the sale of two Lola Mk 6 chassis built for Ford.
Next in line came the development team, they hired already ex-Aston Martinteam manager John Wyer. Ford Motor Co. and engineer Roy Lunn was drafted to England. Lunn had previously designed the mid-engined Mustang mk 1 concept car which ran a 1.7 L V4. Lunn was the only Dearborn automotive engineer with experience on mid-engined cars. The project was started by Broadley, Lunn and Wyer in the Lola Factory, Bromley, in 1963 the development team moved to Slough, England.
As part of their strategy established a new subsidiary company, directed by Wyer, the company was known as Ford Advanced Vehicles Ltd. The first Abbey Panels chassis was delivered March 16, 1963. The 1st Supercar known as the Ford GT/101 was unveiled April 1st, England then exhibited soon after in New York. The GT/101 ran a 4.2 Litre Fairline engine, Colotti transaxle. The Lola GT and single-seater Lotus 29 renown for their controversial 2nd position victory while racing the Indy 500, 1963 also ran the same engine.
Ford adapted the engine in later years to a DOHC, victory again in the Lotus 38, 1965. The critically acclaimed Ford GT first raced the Nürburgring 1000 km race, May 1964 and later the LeMans 24 Hr, though not successfully, all three GT cars retired.
This experience of racing however aided them and in 1965 the GT Mk II was manufactured and dominated the Le Mans race in 1966 with a 1-2-3 finish. The winning car was driven by New Zealand drivers Bruce McLaren and Chris Amon. Ken Miles also lead at the finale of the race.
The publlicity team, saw a perfect time for a photo of all three of the Ford GT40 cars crossing the finish line together, this resulted in the Ford team ordering him to slow down until he was just infront of the second place car, the aim was to get the car half a car length ahead at the checkered flag.
However due to the scoring system on LeMans, differing distances covered by the cars due to differing positions affect results, McLaren-Amon car, became the official winner, due to its starting position.
Miles was denied his greatly deserved unique achievement of winning Sebring, Daytona, and LeMans in the same year.
The GT Mk III came as a road-car only, only 31 were built. It had four headlights, and the rear part of the car was expanded to make room for boot space, the 4.7 L engine was tuned down to 335 bhp, the suspension was softened, the shift was centralised and the car was available as left hand drive car. The most famous Mk III is GT40 M3 1105, this car was a left hand drive, blue GT delivered in Herbert von Karajan in Austria 1968. As the car wasn't particulary good looking, people preferred to buy the GT40 for road use instead they went for the Mk I from Wyer ltd in a street version.
However the Mk IV, drove to victory the following year it ran a GT Mk II engine, but with a different chassis and body, four Mark IV's, three Mark IIs and three Mark I's all raced.
After the rules changed in 1968 to limit the engine size of prototypes to 3.0 L, a maximum of 5.0 L c for Sports category races was introduced. In 1968 a remake of the Ford GT Mk1 running a 4.7 won the LeMans 24Hr against smaller prototype cars. The following year 1969, more experienced prototypes even new still unreliable 4.5 L flat-12 powered Porsche 917s were attempting to dominate. Ickx / Oliver the LeMans winners managed to beat the one remaining 3.0 Porsche 908 by a couple of seconds, running the exact GT40 which won LeMans in 1968. A combination of Porsche brake wear and the decision of the GT40 cars to keep their pads, so close to the end of the LeMans 24Hr and relaxed driving and their efforts at the precise moment, won the race.
Jacky Ickx a GT Rookie, went onto win the LeMans 5 times in later years.
In 1970 disaster struck for the Supercar the GT became obselete due to the revised Porsche 917 domination. There were many different GT 40 versions from early cars running 4.2 L engines;to production models powered by 4.7 L engines, same as the Mustang, some prototypes even had roadster bodywork. The X1 was a roadster built to race in the Autumn, North American Pro Series 1965, Bruce McLaren team entered and was driven by Chris Amon. The purpose of the X1 was to test improvements either originating from Kar Kraft, Shelby or McLaren. The achievements aided the car to go onto winning the Sebring 1966, 12H.

Ford had a problem they needed to come up with a car with greater aerodynamics and a lighter weight than the previous model. It wasn't long before a team started assembling the Ford GT design this time with aluminium panels bonded together to create a lightweight, rigid "tub" shape.
The car was designed to make full use of the recent FIA's Appendix J regulations for racing car assembley, due to this the GT acquired the name of the Ford J-car. The first was finished and test driven in March, 1966, the car set the fastest time on the LeMans trials & the tub weighed only 86 lbs, and the complete J-car weighed just 2660 lb, 300 lb less than the GT Mk II. Ford decided to run the GT MkII's with their proven reliability, little development was carried out on the J-car for the racing season. The following year development was back on, a 2nd J-car was built; However during the high speed test drive, it became airborne momentarily and left the track. The honeycomb chassis of the car did not prove its worth, the tub shattered into pieces on impact, the wrecked J-car burst into a fireball, tragically killing Ford's most esteem driver, Ken Miles.
The unique, flat-topped "bread van" aerodynamics of the car were to blame the lack of spoiler, were the cause of generating excess lift, it was decided to go with a more conventional, though more aerodynamic than the previous GT Mk II, this was used on the Mk 1v. this new car body gained an extra 15 mph than the previous Mk II on the infamous Mulsanna straight of Lemans.
Tweet