You’ve got your one in a million's, and this is likely the only chance you've got to buy a rather special Ford Escort RS Turbo Series 1.

Now when you think of Royalty, you don't really think of a hot hatch; however, as we all know, Princess Diana certainly did things well…let’s just say a little differently  - that included lunching with friends, and zipping around the city.

In all likelihood, this was Princess Diana's escape for a stretch away from travelling around in literally bombproof Rolls-Royces Daimlers et cetera et cetera. Rumour has it there was also a Ford Escort 1.6 injection Cabriolet, which was red that was going be Princess Di's second Ford Escort, however SO14 deemed it – well, not that it wasn't appropriate, it's that it offered little to no privacy, and if some kind of incident did occur, there is pretty much no protection. Because as we all know, the Escort Cabriolet has a canvas roof. 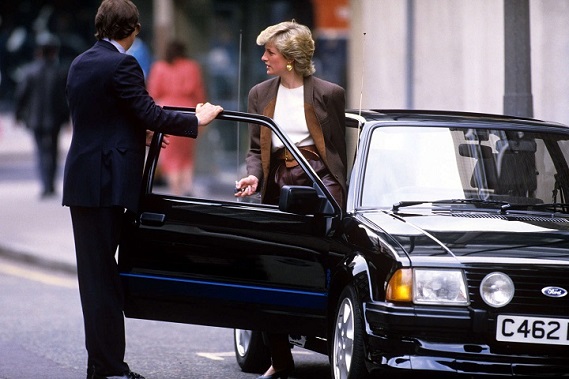 Her Royal Highness wanted this Escort RS Turbo, and the Ford PR department jumped at the chance. One thing is, they said, “They're all white – no other colour!” hence having a black one of a kind was the way to go. This wasn't your everyday Escort for a start, it had a stealth makeover, meaning it was fitted with a regular five slot front grille and the build was undertaken by the special vehicle engineering department. They are the ones who painted the vehicle. It had a secondary rearview mirror for a protection officer, and had a radio stealthily hidden in the glove box  - the cable for which you can still see today!

The Escort was registered in 1985 on the 23rd of August, and as you'd expect, the RS Turbo Series 1 turned heads, not only for the car it was, but obviously for its famous driver. Wherever it was it was followed by the paparazzi, and it didn't matter where - restaurants, boutiques, and pretty much anywhere in Park Lane, Kensington, Chelsea you name it.
There is even one photo that exists that shows his Royal Highness Prince William sat in the back – just think of it, the future King sat in the back with Princess Di smiling at the wheel.

Oh interestingly, at the time, the RS series 2 to was just about to launch and nobody actually knows why the Princess went for the Series 1. It was very clear that Princess Diana held the Series 1 in extremely high regard. Some people have gleaned that because she was the People's Princess, this was seen as the People’s Sportscar.

The RS Turbo 1 wasn't intended to be driven by Princess Diana - the potential future Queen of Great Britain -  and was seen as inconceivable for the future of King William's transport and still to this day it remains the strangest and most daring as a choice of a royal vehicle.

The car was returned to Ford Motor Co. back in May 1988 with only 6800 miles on the clock. It was then sold to a guy called Jeff King, the manager of the Companies Government Sales Department,  and then the strangest thing happened after, when it was used as a promotional giveaway on the Kiss FM radio station. In September 1993 it was won by Miss Jones of Essex, with 12,000 miles on the clock.

In 2008, it reappeared and was acquired  by the custodian of one of the best Ford RS collections in the country.  The rather aptly named Mr. Windsor has now owned this car since the 1st of November 1994, and as of today, its mileage stands at 24,961 miles. 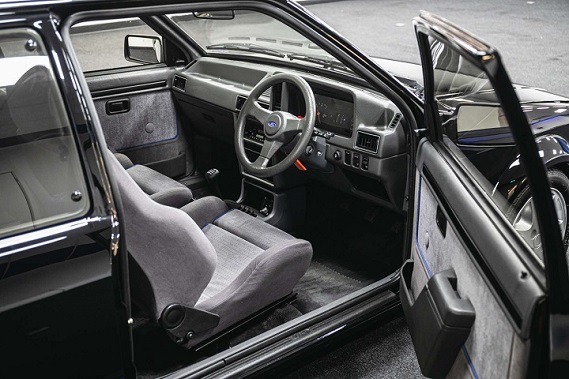 As you'd expect, it’s in virtually Concours condition, and has been subject to a full nut-and-bolt restoration.

As the only black RS Turbo ever made, we'd expect it to collect £250,000.00 and upwards. Some people are thinking it'll be lower than that but no, we stand by our convictions, and think it will there will be nothing stopping it from topping out £500,000.00, maybe even a million.

It all depends on the collectors attending the auction, as there are a lot of Royal enthusiasts that would love to have it in their collection. We expect that many of them will be watching the Silverstone Auctions on Saturday the 27th of August, and hopefully, we will get a chance to see it when we go to the classic in just under a month.

This will be our first time at The Silverstone Classic -  we have been invited to take part in The Retro Run, which takes you around a number of museums and either a 70 or 100 mile jaunt of the local area. We will be heading down in Lady Dorothy - now granted, petrol prices aren't the greatest at the moment, and we estimate we will be getting probably 27 miles to the gallon (so that's around £10 per 27 miles) which is the daunting to say the least, as we normally have Press vehicles! However, the whole point is to take Lady and document this Retro Run, and then do a lap of Silverstone on the Sunday.

We will also be checking out the events, seeing what new cars are on offer, watching lots and lots of classics zooming around Silverstone’s racetrack, and seeing for ourselves how good The Classic is, and why this festival has the reputation it has. Join us in just under a month where we will be live streaming and filming various videos, as well as road tripping it and documenting it all in our Mercedes 230 CE. So if you're at the event, please pop on over and say hello.