It's the VW Kombi camper van from the 1950's and to say yes it’s still being made today in 2012 in Brazil, and yes manufactured through Volkswagen channels. 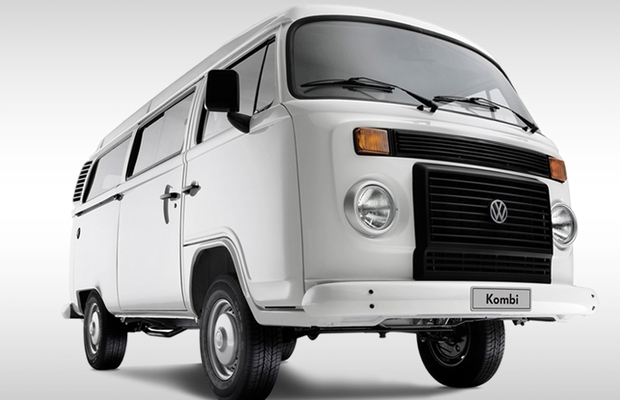 To be exact the factory produces 251 units per day which sell throughout the South American car markets, If you were to buy this revamped camper In Brazil, they will bill you 48,150 Real, equating to £14,800, bargain.

However the question beckons, Is it the same VW camper van, the classic Volkswagen bus loved by many surfer a like?

Well, it still looks the same, 9 seats, sliding barn door, bench seat upfront, steel wheels, rear air intakes and left hand drive. There is the addition of a matte black grill, and two fundamental changes, which will either make or break a camper van lover, the aircooled engine has been replace with wait for it, a Polo 1.4 water cooled engine, a variant which allows the van to run on either petrol or ethanol, essential in south American markets. This engine is matched with a 4 speed manual gearbox.

The good news is it hasn't changed an awful lot, still sketchy steering, feels a little top heavy when unladen and the gearbox feels well... different.

Mind you the Camper isn't your normal vehicle, especially 60+ years on, its a cult symbol, an object of desire and most importantly a family member, in a word it's magical.

New additions to the Kombi include well nothing, it still has all it left the factory with meaning no air con, no anti lock braking system (ABS) or ICE it has Lights, vents controlled on a stick, and similar to Henry Ford you can have your Kombi in a colour as it's white.

If you choose to run your VW bus on Ethnaol rather than petrol and you'll receive 2bhp for your trouble, which isn't to be knocked in a 1.4 Polo engine. As you will have most likely gathered this particular Volkswagen isn't at your local dealer, however you could import from Brazil or use one of the importers in the uk, likelihood is you will be paying quite a bit over £14800 though.

Also be quick if you want due to new legislation being introduced the Kombi is destined to finally go out of production on 31st December 2013. The new legislation prevents cars with no airbags or ABS from being manufactured and sold in Brazil.

The only saving grace for the Kombi would be to fit airbags, in a word creating a" brand new new camper”, thats the word from one of VW’s Brazilian top brasses. A true classic, with many great examples world wide.

VW Kombi Standard 1.4 Specifications based on running on E100 ethanol