1988 - This Italian Super Car company was the brainchild of formerLamborghini cars composite department manager, Horacio Pagani. The company was named Pagani Composite Research and worked very closely with Lambo on many projects, this included restyling the Countach Anniversary, P140 and the Diablo.
While working on this project, Horacio started planning his own concept supercar, this was known as the "C8 Project," he showed the illustrations to Juan Manuel Fangio & even planned to name the project the Fangio F1.
1991 - Modena Design and Pagani collaborated, this particular company was setup to cope with ever increasing levels of engineering, design, model construction, prototypes and moulds.
1992 - Brought the Fangio F1 prototype construction.
1993 - The Fangio F1 was tested at the Dallara wind tunnel, and achieved positive results, the same year Juan Manuel introduced Pagani to Mercedes-Benz.
1994 - German car manufacturer Mercedes agreed to supply a V12 engine for the project.
1999 - After much planning, design and engineering, the final car, now renamed the Zonda C12 (Changed as a mark of respect for Juan Manuel Fangio who had passed away) was presented to the world at the 1999 Geneva Motor Show in Switzerland.
2005 - The Italian supercar manufactuer announced that they planned to triple their production output within the next three years and at the same time tackle and conquer the US market by 2007.
Daimler-Chrysler
Pagani still remains an independent company, however now has close working relationships with the likes of Daimler-Chrysler and AMG. Mercedes AMG develops and supplies all the companies V12 engines. Over the last years the company has yearned for more and more power, therefore Zonda has used tuned and re-engineered versions of the Merc M120 V12.
The first supercar was developed using a 6.0 litre engine and has now progressed to a 7.3 version, the same used in the SL65 AMG. The company, however hasn't limited itself, they were also part of the development of the new Chrysler ME Four-Twelve. 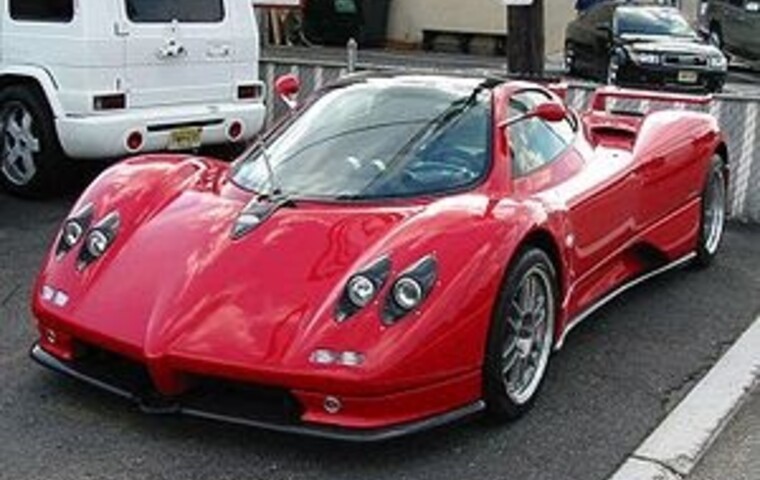 Pagani's sole car is powered by an AMG tuned V12 DOHC and is mid-mounted. This particular Mercedes engine is exclusively used on this car. The Supercar's aerodynamic design was due to inspiration of two things - The fighters planes of the Airforce and the famed Sauber-Mercedes Silver Arrow Group C cars. The Zonda is deemed one of the worlds best supercars ever, epitomized by its stylized exhaust pipe.
Zonda models and engine sizes
C12 6.0 L (5987 cc)
C12 S 7.0 L (7010 cc)
C12 S 7.3 L (7291 cc)
C12 S Roadster
C12 S Monza
GR (racing car)
Zonda F
Roadster F
Future classics
The Italian super car manufacturer have already announced that a new model dubbed the C9, this will be powered by AMG's next gen V12. The engineers on the project are aiming 627 lb ft. of torque are will be using a new Bosch TCS system ( Traction Control System). In addition the the C9 will feature full active aerodynamics.
Tweet