William Walmsley & William Lyons, were so driven by their love for motorcycles they decided to set up a company.

In Blackpool, England, September 4, 1922 two motorbike enthusiasts, Wpany, the Swallow Sidecar Company was born. The company thrived & continued designing and manufacturing motorcycle sidecars and cars until the beginning of World War II.
In 1926 the Swallow Sidecar company decided to venture into car manufacturing & the small Austin Seven, rapidly known as the "People's Car" it was a very spartan design. Due to car production the name was changed to Swallow Sidecar and Coachbuilding Co. They decided to relocate to a larger area. This new thriving company now made many custom bodies for cars as from Morris, Fiat through to Wolseley, Swift, and Standard. 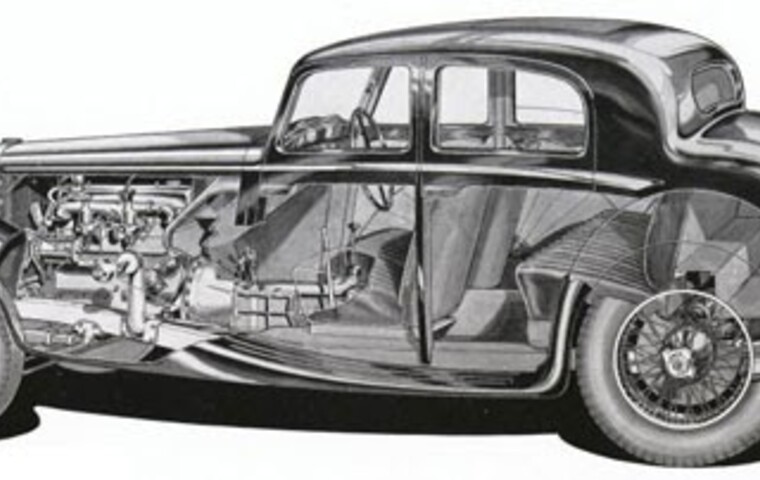 Swallow Sidecar and Coachbuilding Co first car was the SS1, a six-cylinder engine with a modified chassis. The car debuted at the London exhibition in 1931 also an SS2 was designed this had a four-cylinder engine. The larger SS1 was the flagship of Swallow Sidecars, it was a low car fitted with wire wheels a short passenger compartment, rear luggage space with a spare tire fitted at the rear. It was an elegant & expensive looking car and also its main selling point extremely good value.
In 1933, Swallow Sidecar and Coachbuilding Co changed their name to SS Cars Ltd. William Lyons was now the managing director, eventually bought his partner William Walmsley out in 1936.
A new dawn
The following year 1934, a gentleman known as Harry Weslake, recognised for being one of the car industry's top engine experts, joined SS Cars with him he brought his new cylinder head with OHV valve configuration.
In 1935 SS Cars started to name some of their motor cars Jaguar later in the same year William Heynes joined as chief engineer.
Production expanded from manufacturing sidecars and cars to building limousines, cabriolets, and racing & sports cars. Engines started at 1.5-litre and went upto 3.5-litre. One of the most famed autos produced by SS cars was the 3.5-litre SS 100 model, undoubtedly the fastest and famed pre-war Jags, it could reach a staggering 100 mph and achieve 0 - 60 mph in 10.5 seconds. This was due to the Jaguar tuned engine running a compression ratio of 17.5:1.
The SS 100 Model went onto be victorious in racing from Marne Grand Prix of Reims, the Villa Real International event, the Alpine Rally, The Monte Carlo Rally, all the way to the RAC Rally this untarnished history of great racing victories makes it one of the most famed Jaguar cars.
However things changed for SS cars during WWII, car production stopped and moved to manufacturing for the war, when the war ended the name was changed to Jaguar Cars Ltd and car production resumed at full speed.
The XK
1946 was an exciting year for Jaguar Cars in addition to updating older models, William Lyons stated to develop a new sports car, the XK 120, where the design inspiration came from the BMW 328, it came with a six-cylinder 3442 CC DOHC engine. 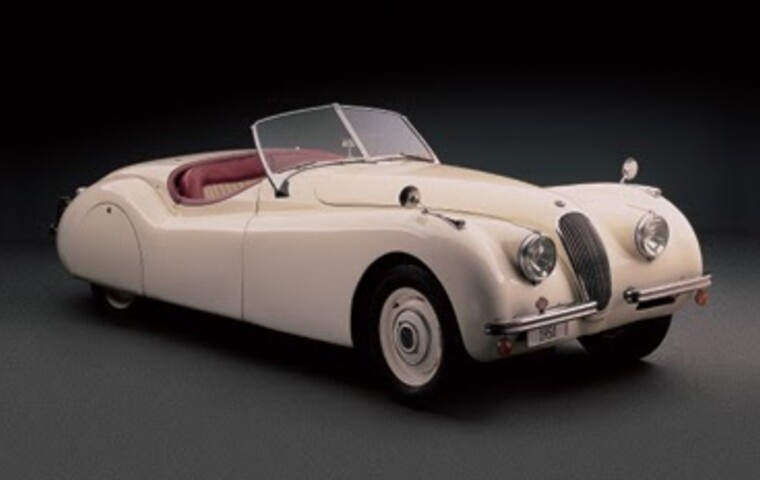 At Earls Court Motor Show 1948, the new motor debuted, their fastest car to date, the XK 120 Roadster with a top speed of around 120 mph in addition impeccable roadholding and a unique design plus a smooth ride. Three years later in 1951 the Fixed Head Coupe was debuted at the Motor Show in Geneva. This version was a classier car trimmed with a fully Veneer dashboard, and wind-up windows. The introduction of the Drophead Coupe in 1953, included was a fully-trimmed convertible hood. The XK 120 was all its manufacturers thought it would be, plus more it proved to be the perfect competition car.
In 1954 Jaguar released the XK140 this came with a rack-and-pinion steering setup, bigger bumpers, chromed everything, a cast grill, and a 190 bhp engine, even space for small children in the back. Three years later in 1957, the Jaguar XK150 was released , however due to its ageing design it didn't create the uproar of its predecessors however it continued to be produced until 1961.
Precarious market position
The mid-fifties were a real time of anxiety for Jaguar Cars Ltd. This was due to the company only having supplied luxury and sports cars, and their reliance on foreign markets.
They were put in a precarious position and had to consider, the repercussions of 2 scenarios :
A recession this would destroy a sports & luxury car market.
Foreign sanctions, any foreign government could close their market to Jaguar for no reason.
It was decided Jaguar needed to strengthen their car market position, this was to be achieved by producing a car that would be appeal to a wider market sold in the UK, primarily. This brought the MK I, debuted at the 1955 World Motor Show. The Mk1 adopted a new design style that of monococoque construction.
They were onto a winner with their Jaguar MK range, so much so that they released the Mk2, this was an instant success. The car featured a completely redesigned dashboard and larger glass area, also Leather interior as standard until 1967. Leather then became an optional extra in the aid to lower the base cost of the car. Other optional extras included fog lights. Varying Jag cars were released to satisfy market gaps between the Jaguar 3.8S and the large MK X.
Then in a surprise move in 1960, Daimler purchased Jaguar.

The coming of the E Type

The development of the Jag E Type started in 1961, the car was started as a race car project, however circumstances and prototypes came and went and the world of racing changed and the Jaguar E type became the famed road car known world wide.
1966 saw Sir William Lyons step down as Jaguar Cars Ltd Managing Director, remaining though as Chairman and CEO of the group. The role of MD was taken by Grice and England. In 1966, July 11 th Jaguar Cars Ltd and the British Motor Corporation Ltd formerly announced they would merge.
By the mid-1960s, it became apparent Jag was manufacturing too many models.
In 1968 a merger between Jaguar and British Leyland formed the largest British car complex ever.
Sir William Lyons retired in 1972, 50 years later after forming the Swallow Sidecar Company on his 21st birthday. The abrupt retirement of was followed by much confusion surrounding Jaguar and its everyday running and indeed its future. Whole departments disappeared into British Leyland without a trace. A report published in 1975 known as the Ryder report, made the future clear, it outlined Jaguar would not continue as a sole entity.
British Leyland Cars was formed this brought the brand new sports car the XJ-S, appearing with other cars at the Earls Courts motor show. They were no longer controlled by one man until the winter of 1979-1980 when Percy Plant was appointed as a nominal chairman. This may be seen as a grave error by Jaguar as Plant was recognised as having a skill to close factories.
April of 1980 saw Jaguar workers morale plummet when a grading and pay strike provoked a vicious response from Sir Michael Edwarde's "return to work or lose your jobs." The company sank deeper and deeper, till it was recognised a new full-time CEO was needed, John Egan was appointed in April 1980. His role included being part of a directorship of Massey Ferguson Machinery Division. Egan was 40 years old, full of ideas and above all inspired. This gave Jag and its employees hope with his first quote -
"One cannot have better ground to build on."
Egan and his optimism reflected in Jaguar production and above all in the employees morale. 1985 saw the company stablise, once again it was recognised, we do not give up!
With John at the companies helm, Jaguar started engineered extremely efficient V12 cylinder heads, this gave them in 1981 the right to boast to producing the fastest production automatic car on the planet, the XJ-S HE, it was capable of reaching 155 mph. In time the AJ6 aluminum, 24-valve engine replaced all cars running the XK engine.
1984, saw Jaguar become once again an independent car company trading on the London stock market. Sir William Lyons passed away the year after. The XJ40 body with an AJ6 engine in the form of the XJ6 Sovereign, Majestic, Vanden Plas or Daimler was released in Europe in 1986 & in 1987 to US markets. The Series III XJ12 continued also.
Jaguar & Ford and the XJ150 Supercar
Ford acquired Jaguar in 1989 and In 1992, the XJ150 was developed and built to test exotic supercar market in Europe, this car never made it to the U.S. It was one of the fastest and most stunning cars ever designed, it was a rear engined supercar recognised globally and rumoured to have gained its name from the fact it could reach 150 mph. The car was a hit on paper and everyone wanted one, it was released as the XJ220.
The XJ12, the Daimler Double Six was re-released with a V12 6.0 in 1993 in the body of an XJ40.
1995 saw the introduction of the Jaguar XJ300 with models available as XJ6, Sovereign, Majestic, Vanden Plas or the new supercharged XJR -- this was the first ever supercharged Jaguar car released.
X-treme
Ford did not fully show their presence till 1997 when the XK8 and supercharged XKR sports cars were unveiled. They both ran a new AJ-V8 engine, this engine was also the basis new XJ8.
Retro styling became a must in 2000 , to capture this trend they released the X200 body, S-type.  2002 saw the appearance of the compact X400 bodied, 4 wheel drive, V6 X-type.
2002 - 2006 Bibiana Boerio, appointed managing director of Jaguar Cars. The release of the all new Jaguar XK and the announcement of a new sports saloon, the Jaguar XF, publicly unveiled autumn 2007.
The XF is targetted at replacing the S-TYPE saloon in the Jaguar line-up. The car will be developed and built in the UK. "The XF a new sports saloon challenging people to think again about Jaguar as daring and different," commented Bibiana Boerio, Managing Director. The XF will appear from spring 2008, market dependant.
It appears that Ford have bitten off more than thay can chew with the proposed sale of Jag and Landrover, various companies are in the running check out the latest news on the Jag blog.
Tweet