The company started in France with Alexandre Darracq who started a car manufacturing company in Portello, Milan which made single & two cylinder engines with car parts imported from Paris, France. Despite Alexandre best efforts and aspirations he didn't make it. In 1909 Darracq sold his Milan based auto factory to an Italian man.

Just after the buyout, Anonima Lombarda Fabbrica Automobili or ALFA emerged in the Italian market place. In 1915 Nicola Romeo a skilled automotive engineer bought the factory, Alfa was now known as "ALFA ROMEO-MILANO".

1920 brought his first car the Torpedo with between 20-30 BHP. At the same time famed Opera singer Guiseppe Campari gained Alfa Romeo one of their first victories. Guiseppe was a member of The Three Musketeers, the name given to Alfa's design team this consisting of Ascari history, Campari and Sivocci,the trio gained this label after achieving fame for their pioneering work. The Musketeers, designed the first Grand Prix car named the P2 and designed by Vittorio Jano.

Alfa Romeo designed their first real monoposto Grand prix car, the P3 making its first appearance in 1932. This racing car was phenominal and was driven by Nuvolari. This inspiration drove the design of the 1932 two seater Spyder running a 2.3 litre 8 cylinder engine.

1933 saw financial problems lead to the Italian state taking control of Alfa Romeo. Mussolini saw their potential and inspired the team to continue racing, a race department head was taken on, one Enzo Ferrari.

Alfa Romeo In the period running upto to World War II, was very successful, they achieved eleven victories in the Mille Miglia and four on the Le Mans 24 hour. Their greatest win was in the 1935 German Grand Prix, Nürburgring, Nuvolari beat all the competition including Mercedes Benz history and Auto Union.

In 1938 Enzo asked Gioacchino Colombo to come up with a car that would be capable of dominating the Grand Prix season, he came up with the Tipo 158 ‘Alfetta’ Grand Prix-car with achieved its goal with ease. After the success of the ‘Alfetta’, technicians designed the limited edition Tipo 158 Guiseppe Farina, this car went onto win the 1950 World Championship. The Alfetta was renamed the 159, and modified including a tubular element chassis, De Dion axle and uprated engine.

Many Coupé-versions soon followed with the Super and Sprint, a racing-version known as the Disco Volante AKA the Flying Saucer followed in Milan in 1952, this model was never mass produced, a conventional Volante was released with a 3.0 litre, 6-cylinder-engine this yet again achieved victory as the second position car in the Mille Miglia 1953 and went onto win at the Merano Grand Prix.

1954 the Giulietta was released, with a 1300cc DOHC 4-cylinder-engine. A Coupe available with two doors or as a four door saloon, including special edition Zagato, Pininfarina and Bertone models.

1963 saw the Arese manufacturing plant near by Milan, Italy built, this was to replace the Portello factory, which had been outgrown. The Arese factory became the development home of the Tipo 33 racing car, this car in 1971 with a 3.0 litre engine saw victory at the 1000km-race at Brands Hatch, Targa Florio, and finally the Watkins Glen 6 Hour race.

1967 saw the Montreal car exhibition debut the Bertone designed Alfa Romeo Montreal. With its 2.6 litre V-8 fuel injected engine and five speed gearbox, and it's 2 + 2 seat setup. It was a sportscar with superiority and yet realistic race additions and capable of 135 mph. The Montreal was built on the Giulia 1600 coupe chassis, this car became recognised as the pride of Alfa Romeo, 1970 to 1975 - 3925 models were manufactured.

1968 saw the launch of the new Giulia, with its 1.8 litre engine this car came at the time the Italian government were convincing Alfa Romeo to build another manufacturing plant in Naples to reduce poverty, the Italian company agreed.

1971 the doors opened as well as the Alfasud (Alfa South) being released, a new breed of automobile, with it's SOHC 1186cc boxer 63 BHP engine , a four-speed gearbox, and front drive and equipped with McPherson front shocks. The model was praised due to its amazing handling, a direct result of it's wide track and rear axle balanced perfectly. It also came with disc brakes all round. The Alfasud was a winner and this was recognised, keeping the car alive by releasing faster and faster versions thus allowing it to dominate the compact and sports car markets. The Alfetta was reborn too, a 1779cc 4-cylinder engine, De Dion-rearaxle and 5-speed gearbox saloon, over the years the engines were increased.

1986 the Giulietta was no longer manufactured after 20 years. The Alfa 75 derived from the 75th year jubilee of Alfa Romeo and known in the US as the Milano. the car was given bigger engine sizes over the following years.

1987 Alfa Romeo became part of the FIAT group they were chosen to represent the sportscar part of FIAT's market.

In 1994 the Alfa RZ, a convertible Sport Zagato in a word, was introduced. The GTV was debuted at Salon de Paris in addition an open top version was introduced to, the GTV Spyder.

In 1998 saw the return of the 166, developed in The Alfa Romeo Centro Stile design by Walter de Silva. A gutsy model available with 4 cylinder V-6 engines.

Alfa Romeo reintroduces the 156 Sportswagon, 147 released, the successor to the 145. 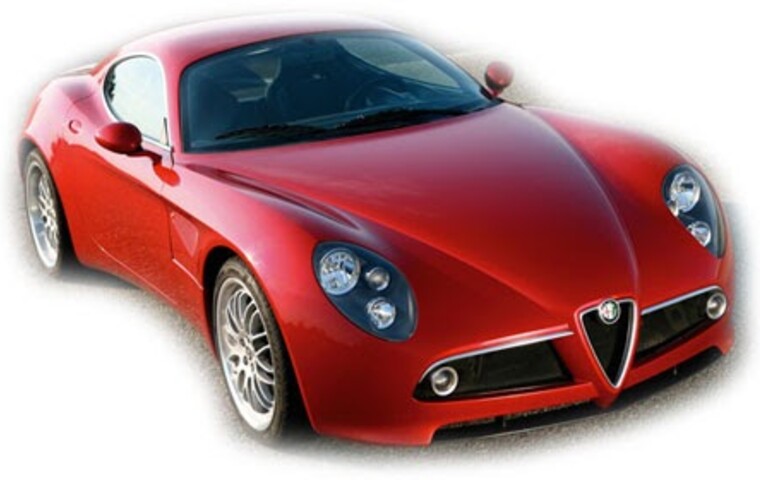